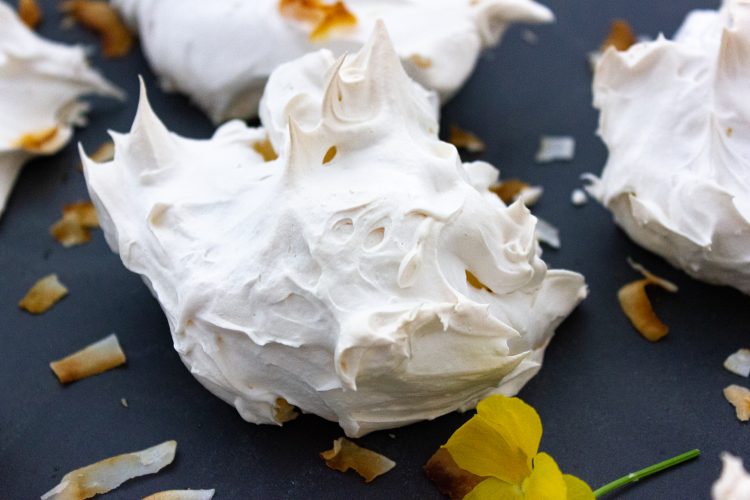 These Sweet and Crisp Schaum Tortes look like a cloud and taste like a dream.They’re crispy on the outside, but (similar to cotton candy) melt in your mouth as you chew them. Pair them with some toasted coconut whipped cream and rum caramelized pineapple and you’ll be on cloud nine.

Schaum (pronounced sh-ah-m) tortes are the German equivalent to a pavlova or British Meringue (aka Eton’s Mess). While the pavlova is a little larger of a torte and usually looks like a cake, Eton’s Mess is crumbled up and mixed in with fruit. Our Schaum Tortes are standalone little misshapen white clouds that are hard to the touch, but melt in your mouth. They are pure sweetness. In short, my 4 year old taste-tester explained Schaum Tortes perfectly this morning, asking, “Why did you hide the really good, fluffy, white candy?”

Intriguingly, in the US, a schaum torte is virtually unknown. Yet in Wisconsin, primarily the southeastern portion, everyone seems to know what it is. I speculate that it all relates to a special little cookbook compiled after World War II, called, “Our Favorite Recipes {By The Ladies of St. John’s Ev. Lutheran Church in West Bend, WI.}” Originally published in 1949, the cookbook was a wildly successful church fundraiser, selling hundreds of thousands of copies through its final printing in 2016.

How Does This Connect To You?

I was just getting there. Our dad grew up in West Bend Wisconsin with a mother who was an amazing cook. She had the aforementioned cookbook and made this Schaum Torte recipe on a regular basis. I have vivid memories of Grandma Haen surprising us by pulling these out for dessert and topping them with some fresh strawberries! And there’s the cute meet of Stevens and the Schaum Torte. Our recipe is based off that cookbook recipe, with just a few edits.

What Do I Need to Know?

The interesting thing about baking is that it is pure chemistry; changes in ingredient amounts or heat all affect the final product adversely or positively. Quite often, baking bread has a significant leeway resulting in positive results, schaum tortes do not… I’ve attempted to improve upon these fluff balls with limited success. Generally, any diversion from the original recipe ends in failure. Adding coconut flavoring sounds great, right? Wrong, it literally takes all the air out of the whites. Many of our recipe’s allow for substitutions or additions, but this one does NOT. Follow the recipe exactly and you’ll be rewarded!

Keep the screen of your device on

Did you make this recipe?