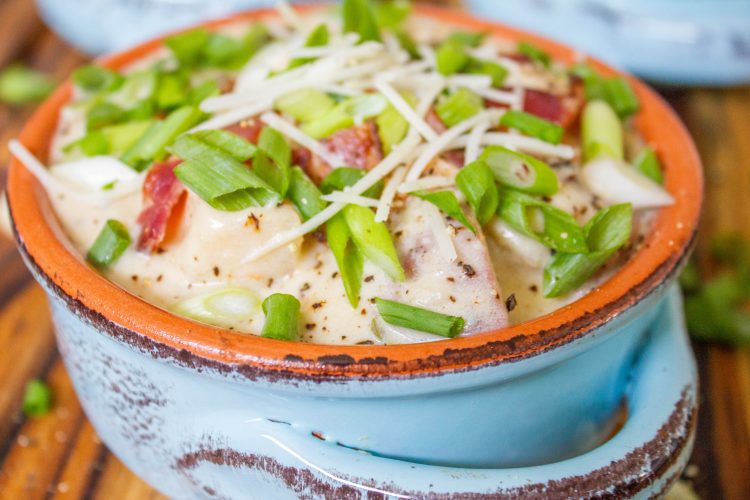 This Hearty Potato Chowder with Bacon and Gruyere Cheese is hearty, rich, and delicious! Served with a salad and crusty bread, it makes an elegant meal, guaranteed to warm the heart of near anyone.

Chowder? Why and How?

Fall is on the horizon and we could not be happier about that! As days grow shorter and the temperatures drop, we can feel a new season coming about, and like any good squirrel, it’s time to start that hearty eating! This incredible and rich Hearty Potato Chowder with Bacon and Gruyere Cheese will warm you up like the coziest of blankets.

I’m not sure what clicked, but it was a high of 92°F here in Atlanta ,when I decided to make this chowder! Sitting out on our patio, I spooned mouthful after mouthful of this rich, hearty soup until the bowl was licked clean and then went inside for seconds… I promise you, it wasn’t my best look as I continuously dabbed sweat from my forehead, but it was darn worth it!

The Perfect Chowder for Freezing!

Going back to the squirrel mentality, I wanted a recipe that I could burrow in my freezer for those cold winter days. (I know, I know, I live in Atlanta and it doesn’t get FREEZING here, but you can’t completely take the Chicago (winter) out of this chef.) This chowder fits the bill perfectly, it’s a homey, rich, and filling. As Barbara, my wife said, “It’s like a better version of a Panera soup.” Originally thinking of a clam chowder, I quickly decided against it. Reheated seafood isn’t my cup of tea. Then I thought about a corn chowder, but I’ve got other plans for that… Browsing my fridge and eyeing some amazing Nueske’s Hardwood Smoked Bacon triggered it. Bacon, potatoes, and cheese; everyone knows you couldn’t ask for more complimentary flavors! In fact, it should be taught in Preschool right after the primary colors.

How Should I Pair This?

Speaking of Panera, this soup is paired perfectly with some crusty French bread or sourdough. Before going gluten free, one of my favorite lunches was their Sourdough Bread Bowl with Broccoli Cheddar Soup. Yum! While I haven’t tackled it yet, eventually I’ll get my gf bread recipes posted. Though in a pinch, ‘Against the Grain’ makes a frozen baguette that’s spot on. I usually brush it with a bit of olive oil and throw it in the oven until its warm, crusty, and ready to devour.

There is only so much you can say about a Hearty Potato Chowder with Bacon and Gruyere. It’s delicious, now go on and start making it!

A delicious and Hearty Potato Chowder with Bacon and Gruyere Cheese. It is elegant and guaranteed to warm the heart of near anyone.

Keep the screen of your device on

Did you make this recipe?